Unfortunately due to the current pandemic we are unable to gather in remembrance of Chief Tuttlemondo. Chief Tuttlemondo made the supreme sacrifice forty years ago today. Please keep the Chief and his family in your thoughts and prayers.

Forty years ago today, August 13th 1980, the tone alerts of the computer assisted dispatch system broke the silence of the firehouse at 4:36 am to announce box 1672 with the address of 124 Osborn St between Pitkin and Belmont. Engine 231, 232, and 227 with Ladder 120 and 176 were assigned on the initial alarm along with Battalion 44 as the incident commander. As Watkins Street units pulled onto the firehouse apron, an orange glow lit up the sky a mere two blocks away, indicating they were going to work. Upon arrival, units were confronted with a vacant 3 story frame with intense fire on the second and third floors. Exposure #2 was an empty lot, exposure 3 was a 1 story setback and exposure 4 was a similar attached vacant. Chief Tuttlemondo ordered his aide to transmit “all hands at work extra engine and truck”. Ladder 120 positioned their apparatus in front of the fire building in preparation for a large caliber stream attack. Searches would be delayed in spite of sketchy information squatters were known to frequent the building. After the fire was knocked down by the tower ladder, Ladder 120 entered the building to perform searches while Engine 227, commanded by Lt. Mike Ramos, stretched a line to extinguish smoldering fire on the first floor. In an attempt to gain a better handle of interior conditions, Chief Tuttlemondo accompanied Engine 227 as they moved in.

At 5:12 am, about 30 minutes after the initial alarm, there was a tremendous roar and unanticipated collapse trapping Chief Tuttlemondo and the operating members of Engine 227. Members of Ladder 120, who were operating inside the building on the upper floors, were able to get to the perimeter of the building and ride the collapse down. In the split seconds before the building came collapsing down upon them, Battalion Chief Frank Tuttlemondo used there precious moments to push on oof the engine firefighters to safety and throw his body over Lt. Ramos to shield him of the impending collapse. A second alarm was immediately transmitted followed by a third alarm. When Lt. Ramos regained consciousness amid the rubble,. he realized his head was being cradled by Chief Tuttlemondo’s arm. Chief Tuttlemondo succumbed to injuries sustained shorty after arriving at Kings County Hospital. Seven other firefighters were seriously injured. Two civilian bodies were later recovered by members sifting through debris. The fire was declared “under control” at 11:16 am that same day.

Chief Tuttlemondo was a 23 year veteran of the Fire Department at the time of his death. He worked most of his career in brooklyn with 6 of those years assigned to Battalion 44. He was liked by all, a fireman’s fireman, who was an avid heath fanatic and always interested in the men. He worked in an era of legends and unfortunately became one himself. To commemorate his life, a department medal has been endowed which is presented bi-annualy to a member of the department. It was first awarded on the medal day of June 1982. An annual Scholarship fund has also been organized to jointly honor the memories of both Chief Tuttlemondo and Lt. Robert R. Doleny of E332 who made the supreme sacrifice 5 months earlier on March 5th under similar circumstances. Chief Tuttlemondo was posthumously awarded the Thomas E. Crimmins Medal for his unselfish act of heroism. Today we commemorate his sacrifice and celebrate his memory.

“Greater love hath no man than this, that a man lay down his life for his friends” John XV: 13 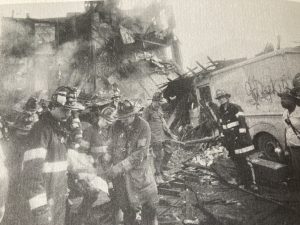 Battalion Chief Tuttlemondo being carried after the collapse.