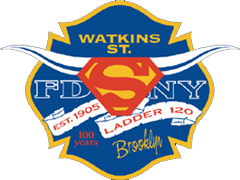 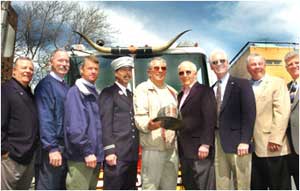 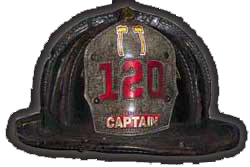 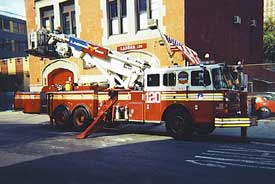 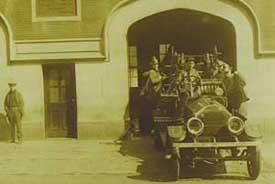 The earliest medal awarded to Ladder 120 was to Captain James F. Mooney in 1917 for having the best disciplined company in 1916. He received the Stephenson Medal. View Story

St. Patrick's Day 1930, Fireman Frank H. Magan rescued a father and his two children from 277 Watkins Street. For his heroic work he was awarded the Brooklyn Citizens Medal. View Story

Fireman Victor F. Rossi on October 21, 1950 rescued two women from 162 Glenmore Avenue. Fireman Rossi earned the James Gordon Bennett Medal, the oldest medal awarded for bravery each year. It was also the best rescue in a three year period and he earned the Doctor Harry M. Archer Medal in 1954. This medal is given only to a James Gordon Bennett Medal winner once every three years. View Story View Story

On October 31, 1952 Fireman Rossi earned the Hugh Bonner Medal for capturing a culprit who was trying to steal the 44th Battalion’s car from in front of quarters. View Story

The Brooklyn Citizen Medal was awarded to Lieutenant John F. Finnegan for rescuing a little girl from her burning apartment at 99 Belmont Street on June 4, 1958. View Story

On May 10, 1965, Lieutenant Curt A. Landgrebe received the Brooklyn Citizen Medal for rescuing a woman from 426 Snediker Avenue. View Story

For his heroic work at 712 Stone Avenue on November 4, 1965, Lieutenant Eugene P. Timmons received the Vincent J. Kane Medal for rescuing a small boy from a burning apartment. View Story

Fireman Daniel J. Tracy earned three medals in three years. The first medal, the Commissioner Edward Thompson Medal was awarded on March 25, 1965 for rescuing five children from an apartment fire at 593 Howard Avenue. His second medal, the Brummer Medal was given for rescuing two people from 273 Amboy Street on April 23, 1966. His last medal was again awarded for rescuing a child from 1586 St. Marks Avenue on July 21, 1967. For this rescue at extreme personal risk, Fireman Tracy earned the Brooklyn Citizen Medal. View Story View Story

On June 22, 1968 Fireman John J. Connolly (4) rescued a mother and her two children from 358 Hinsdale Street. The Emerald Society Medal was awarded Fireman Connolly for this rescue.

On April 3, 1970 FF Rudy Greco rescued an elderly man from the 3rd floor at 1961 Bergen Street. For his actions he was awarded John J. McElligott Medal. View Story

Fireman Thomas J. Cherry rescued a child from a burning window sill at 705 Saratoga Avenue on September 22, 1972. He swung pendulum fashion across an eight foot gap between the adjoining fire escape and window to rescue the child. For this heroic rescue Fireman Thomas J. Cherry was awarded the Henry D. Brookman Medal. View Story

Another Brooklyn Citizen Medal was awarded to Fireman Louis Monteleone for rescuing three unconscious people from a burning apartment at 298 Sumpter Street on January 15, 1978. View Story

On December 22, 1979 Fireman Robert L. Scheriff, off duty, rescued three people from a four car accident on the Interboro Parkway. In true Hollywood tradition the cars exploded in a fireball just as Scheriff pulled the last person from the wreck. He received the American Legion Fire Department Post No. 930 Mark M Wohlfeld Memorial Medal for this rescue. View Story

The William F. Conran Medal was awarded to Firefighter Michael P. Harrington for making a rope rescue from a seventh floor window at 375 Blake Avenue on July 25, 1980. View Story

Firefighter Kevin D. Heaney would rescue a resident and fellow firefighter from a burning fire apartment on September 4, 1982 at 1912 Bergen Street. He would receive the Albert S. Johnston Medal for his daring rescue. View Story

Firefighter Michael T. Kelly with only nine months on the job rescued a nine year old boy from his burning apartment at 1965 Bergen Street on May 29, 1992. He received the Commissioner Edward Thompson Medal for this extraordinary rescue. View Story

On July 30, 2000 two members of Ladder 120 rescued a family of five from a thirteenth floor apartment at 315 Lavonia Avenue. Fireman Michael P. Cummings received the Brooklyn Citizen Medal and Lieutenant Dennis Gordon receiving the Hugh Bonner Medal. Trapped in the bedroom of the fire apartment both men gave up their masks to the barely conscious children until the fire was knocked down in the living room and kitchen. View Story View Story

In 2006, Lt. Lawrence E. Tompkins was awarded the Albert S. Johnston Medal for the successful rescue of a senior citizen who happened to also be an amputee from a fire on the second floor at 393 Powell Street. View Story

In 2007, FF Glen J. Merkitch rescued a civilian on the floor above at a 2nd floor job at 2132A Fulton Street/Rockaway Ave. He found Theodore Dinkins wedged between a bed and the wall and proceeded to drag him to the front of the buildinig to the window where L120′s bucket was in position to carry the occupant to the street. For his actions, FF Merkitch was awarded the Thomas E. Crimmons Medal. View Story

FF Larry D. Schneckenburger was awarded the Pulaski Association Medal in 2007 for his quick thinking actions in front of quarters on March 20th, 2006. FF Schneckenburger witnessed a gunfight at the same time children were being dismissed from the adjacent school and immediately put himself in harms way. He ushered many kids to safety while a total of 17 shots were fired and one teacher was struck twice in the leg. View Story

FF John P. Drew was awarded the Chief Joseph B. Martin Medal in 2007 for his actions at a fire at 348 Chester Street on December 27th, 2005. As any FF from Watkins St can attest, a box at the "Marcus Garvey" buildings presents many unique challenges and variations. FF Drew rescued Mary Patterson (a relative of former heavyweight boxer Floyd Patterson) from the top floor. View Story

FF Peter E. Carroll was the 3rd member in L120 history to be awarded the Albert S. Johnston Medal for a daring rescue of a 40 year old woman on the floor above of a lightweight construction duplex apartment at 340 Marion Street on August 25, 2011. (which occurred as signal 10-70 was transmitted for water delivery problems).

FF Michael P. Richardson was awarded the 2013 Columbia Society Medal for operating above the fire in deteriorating conditions and rescuing a 55 year old man who was unconscious in his bed at Box 1636 which was transmitted for a heavy fire in the store of a 2 story brick adjacent to E283 quarters on the night of October 7, 2012.

Captain Christopher G. Eysser, the 26th Company Commander in L120 history was awarded the 2014 Albert S. Johnston Medal for the rescue of 2 unconscious children in the rear bedroom at a 3 story LRFPMD at 373 Blake Ave on July 6, 2013