Within a few weeks members of Ladder 120 rescued two elderly females from fires a only few blocks apart.

On Christmas night, the men of Watkins Street were alerted to a reported fire on Herzl street just off of Pitkin. A 10-75 was given for a fire in a 2 story attached private dwelling for a fire on the first floor. 283 was the first due Engine. As the inside team was forcing the front door, the OVM and roof made their way to the rear with portable ladders to vent and search. The dispatcher updated that there was a blind and bed ridden person trapped on the first floor. 120 Can, FF Sean Quinn, came across the bed and transmitted the 10-45. FF Pete Carroll, L120 irons, assisted in the removal of the victim. She was then handed off to EMS who transported her to an area hospital. L120 was under the command of Lt. Scott Coyne, LCC Andy Eckstein, OVM Ryan Mosiello, Roof Joe Masella, Irons Pete Carroll, Can Sean Quinn.

Late one evening the tones went off for a fire on Grafton Street cross of Sutter ave, Engine 283 arrived on scene first and transmitted a 10-75 for fire on the first floor of a “2 and 2” (2 Story semi attached brick building). The fire was located on the first floor public hall, stairwell and front porch. The dispatcher updated responding units that there was a reported person trapped on the 2nd floor. With multiple people showing on the front porch on arrival, Engine 283s door man threw a portable ladder to the take them down. With the aid of the can man FF Ryan Mosiello(L120), FF Kevin Healy(L120 Irons) was able to get up the stairs and began to search for the reported trapped occupant. FF Healy found a semi conscious victim just outside the bathroom. FF Healy gave a 10-45 and pulled the victim into the rear bedroom to shelter in place until the fire was extinguished on the stairs. The victim was then brought out of the building and into the care of EMS.

The men of Watkins Street performed within the highest traditions of the job, searching aggressively, operating as a unit attacking the building from all directions, and in conjunction with the engines aggressive hose line operations these two women’s lives were saved. Though the faces riding the fire truck may have changed through the years or the neighborhood may look different, the hard men of Watkins Street will not fail to maintain the standard of excellence paved by those before us and that the residents of Brownsville has come to expect on a daily basis. 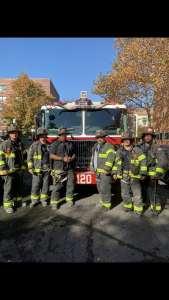