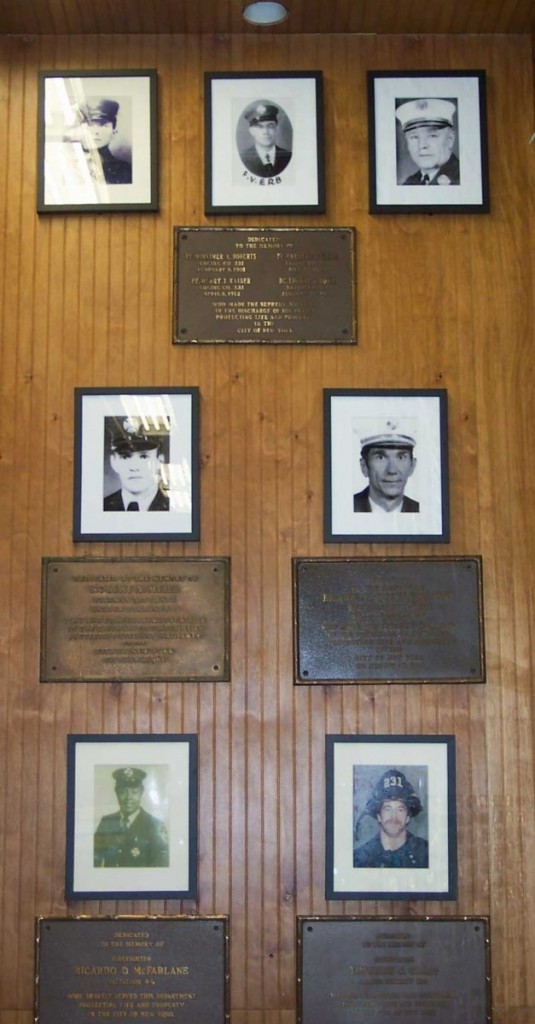 FF Mortimer A. Roberts E-131 (E231) February 5th, 1901
FF Roberts, ECC was thrown from the Engine onto Pitkin Ave while responding to a fire as the front wheels of the engine were caught in the ruts made by the wagons in the hard mud of Watkins Street. The horses were madly galloping as Roberts was pinned under the wheels within 10 seconds after the alarm sounded. FF Roberts was 34 years old and survived by a wife and two children.

FF Henry J. Kaiser E131 (E231) April 6th, 1912
FF Kaiser, a two year member of the FDNY was killed from a backdraft type explosion while operating from the 2nd floor rear fire escape at a 4 story factory fire at Livonia and Williams Ave’s. The 3 alarm fire destroyed the entire building. FF Kaiser, who heroically survived for 3 days following the fire was survived by a wife and 2 children.

FF Frederick V. Erb E231 July 23, 1934
FF Erb died as a result of injuries sustained after he was thrown from the Bn44 car while responding to a false alarm on East NY and Rockaway Ave’s. FF Erb, who was detailed to drive Bn44 collided with a taxi and fractured his skull after being thrown against the curb.

BC Eugene G. Dowd Bn44 January 27th, 1955
BC Dowd died in the line of duty on January 27th, 1955 as a result of injuries sustained while operating at Box 1643. He suffered a heart attack and left behind a wife, Josephine.

BC Frank T. Tuttlemondo Bn44 Aug 13th, 1980
BC Tuttlemondo died while operating at 124 Osbourne Street during a fire in a 3 story vacant which he correctly assumed had squatters inside at 4:30AM. The Chief heroically would use his own body to shield a fellow FF during a collapse which would in fact save the members’ life. He was survived by his wife Jenny and 2 kids, Thomas and Katherine.